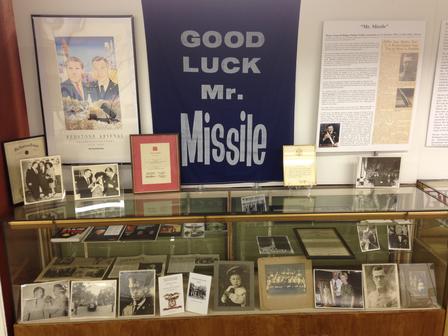 Holger Nelson Toftoy was born just north of Marseilles, Illinois. He made national attention in 1946 by predicting space travel to the moon. In 1944 Toftoy recruited 100 Nazi scientists including Dr. Wernher von Braun to work for America. The results gave us our military lead, the space program and so many technological advantages that we now all enjoy. On 13 May 1959 he was the subject of the television show "This is your Life" in Hollywood when his enthusiasm and exuberance were seen by the entire country. Can you imagine our world today without HN Toftoy’s leadership, initiative, persuasiveness and persistence?

He began his military service as an ROTC cadet at the University of Wisconsin in 1920. During his second year there, he was appointed to the U.S. Military Academy and was graduated in 1926.

In 1944, he became Chief of the Army Ordnance Technical Intelligence teams assigned to Europe to seek out and evaluate captured enemy Ordnance weapons and equipment. During this time a series of historic events occurred that have had a profound effect upon the U.S. missile and apace programs.

The technical intelligence teams were asked to make a full report on and send home specimens of two of the most spectacular German weapons of the war, the V-1 and V-2 rockets. These weapons were developed by a group of scientists under direction of Dr. Wernher von Braun at Peenemunde. While the search was underway for these rockets an assistant to Toftoy, MAJ James P. Hamill, made contact with Dr. von Braun and members of the Peenemunde team who had retreated to the Harz Mountains in advance of the Allied armies.

Toftoy knew the U.S. Army was planning to add guided missiles to its weapons program. He first cabled, then went personally to Washington to recommend that the German scientists be brought to the U.S. for interrogation and possible employment. By September 1945, the first group of scientists, including von Braun, had arrived in the U.S. Toftoy was then transferred back to Washington and assigned responsibility for direction of the Army guided missile program.

His next assignment as Chief of Ordnance Technical Intelligence in Europe introduced Colonel Toftoy to his ultimate career, which led to the well-earned nickname "Mister Missile." His responsibilities in the new job included the examination and evaluation of all new or unknown captured German equipment. He was also to select specimens for testing in the United Kingdom and the United States.

An urgent request for V-2 rockets was impossible to fulfill because each one had been fired as soon as assembled, tested, and declared ready. Then came an unbelievable stroke of luck: advancing American troops had discovered a V-2 factory in a salt mine, with a huge supply of components. In reply to his cable enquiring for an expression of interest, the War Department requested enough parts to assemble one hundred missiles.

Overlooking his directive that all technologically advanced materials were to be held "intact" for disposal by Allied representatives, Toftoy ordered all the components packed and shipped to the United States. None were to be shipped to the British, another violation of his instructions. Extreme urgency and frantic efforts completed the job in time, for the factory was in the zone soon to be occupied by the Russians. Sixteen shiploads of components were sent to the United States and forwarded to the newly-established rocket proving ground at White Sands, New Mexico.

Just about his first action after reporting to Washington was to inquire about his recommendation to bring the German rocket experts to the United States. Persevering against bureaucratic delays and interminable red tape, Toftoy at last secured the approval of the State, War, and Navy Departments, but for only one hundred persons, not the three hundred he believed necessary. His genius in outwitting those who lacked his vision was displayed when he returned from Germany with a "compromise" number of one hundred twenty-seven of the most capable scientists and technicians, headed by Kurt Debus and Wernher Von Braun. Ludy arranged for establishing the group at the new White Sands test station and set them to assembling the V-2 components he had forwarded from Germany. Foreseeing even larger and more powerful rockets than the V-2, Ludy demanded the construction of a much larger test stand than was needed; a test stand called "Toftoy's Folly." In but a few years this test stand had to be enlarged, the missiles had outgrown it.

Under Toftoy's direction, all but one of one captured V-2 missiles were assembled, tested, and find in a program of scientific research in many fields, the one not fired was sand for display in the Ordnance Museum at Aberdeen Proving Grounds. 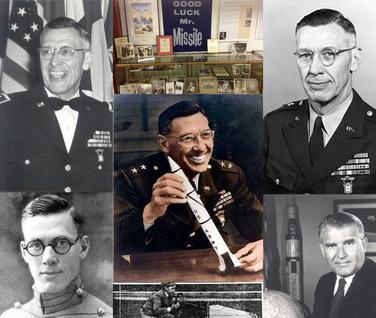