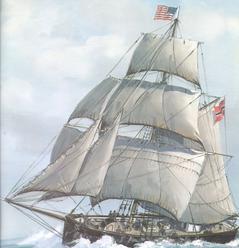 The first permanent* Norwegian settlement was in LaSalle County around the Fox River, which is now Norway, Illinois.  This first pioneer group, called “Sloopers”, was led by early explorer, Cleng Peerson.  The Sloopers came to America primarily for religious freedom.  The group of 52 immigrants was a combination of Quaker and Hauge Lutheran, both outcasts of the time by the State Church.   Soon after their settlement along the Fox River, word got back to Norway, and the rush began to secure new land in America.  Within the next 80 years over 800,000 Norwegians would relocate to America, a number second only to the Irish.

*Nine years prior to the Fox River settlement, the Sloopers made a home in Kendall of upstate New York, but that is not considered permanent since all but two families relocated to Illinois.  Even today there is a strong presence of Slooper descendants in the Fox River area.

There were Norwegians in America long before 1825, usually sailors settling down, but not as large a settlement as the Sloopers.

The Norwegian “Mayflower” called the “Restauration”  left Stavanger, Norway, for New York City with 52 brave emigrants who, as Quakers and Haugeans, sought relief from religious persecution in Norway.   The Restauration was a small “sloop” style ship, built in Hardanger in 1801.  Her dimensions were 54 feet long and 16 feet wide.

Stavanger was then only a little town of about 3,000 [between the size of  Illinois towns, Seneca and Marseilles] so it created much talk and gossip when it was found that a group of Quakers and Haugeans were to leave for a distant and little known land called America.

The Norwegian “Mayflower” called the “Restauration”